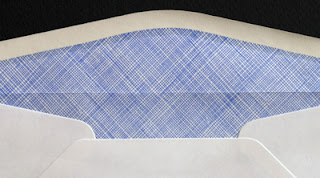 Security envelopes have a patterned tint printed on the inside, which makes it difficult to see the contents.
Window envelopes have a hole cut in the front side that allows the paper within to be seen. They are generally arranged so that the sending address printed on the letter is visible, saving the sender from having to duplicate the address on the envelope itself. The window is normally covered with a transparent or translucent film to protect the letter inside, as was first designed by Americus F. Callahan in 1901 and patented the following year. In some cases, shortages of materials or the need to economize resulted in envelopes that had no film covering the window. One innovative process, invented in Europe about 1905, involved using hot oil to saturate the area of the envelope where the address would appear. The treated area became sufficiently translucent for the address to be readable. As of 2009 there is no international standard for window envelopes, but some countries, including Germany and the UK, have national standards.
Posted by envelopesprint4less at 8:55 AM

envelopesprint4less
Since 1983 we have been printing custom envelopes. Envelopes Printed 4 Less© offers every size and shape of envelope, custom printed with your logo/design and information at bottom line prices.